Blog - Latest News
You are here: Home1 / News2 / Combining Cannabis With Other Herbs

Combining Cannabis With Other Herbs 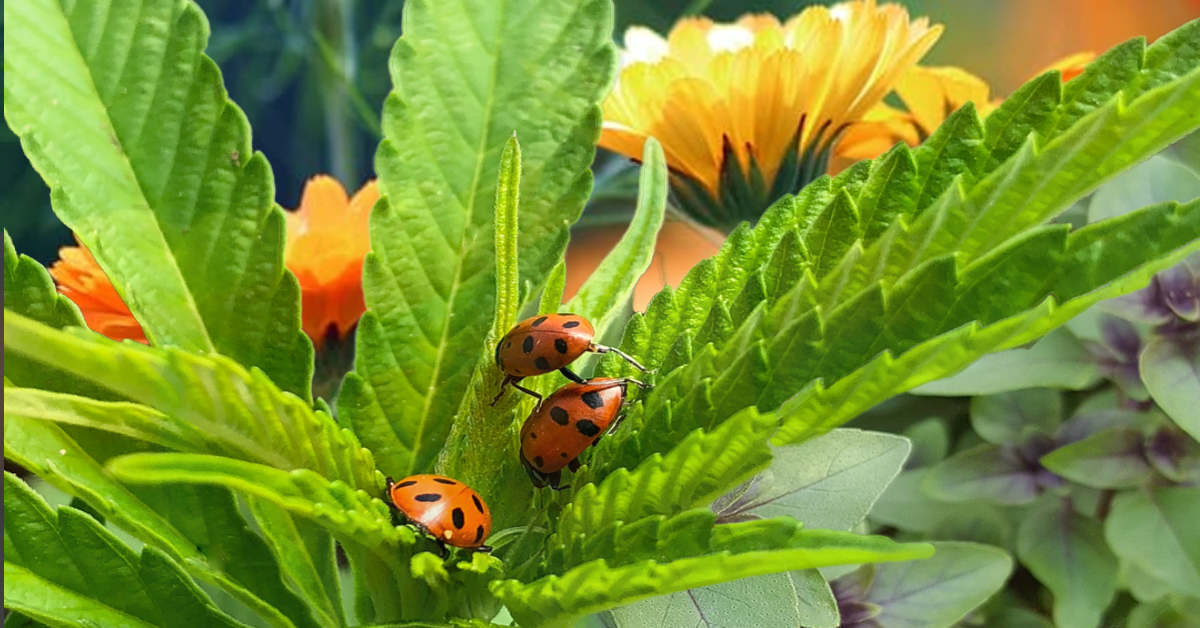 The purpose of this review of the literature is to discuss the potential use of other medicinal herbs to compliment the effects of cannabis as a medicinal agent. It may be possible to link benefits based on herbs that contain similar phytochemicals as cannabis or have actions with comparable pharmacodynamics.

“The therapeutic effectiveness of medicinal plants from a perspective of evolutionary pharmacology and secondary metabolites is based on a broad activity towards human cells, bacteria, fungi, viruses, and parasites. The secondary metabolites in herbal extracts include various phenolics and terpenoids that are multi-target agents modulating the activity of proteins, nucleic acids, and bio-membranes. They can be used as medicine to treat a wide range of disorders, diseases, and infections. Apparently some secondary metabolites of an extract can interact in a synergistic fashion which would potentiate their bioactivities.” [1]

This research will review the literature on PubMed and other sources. The pharmacodynamic effects and herbs to be discussed include: 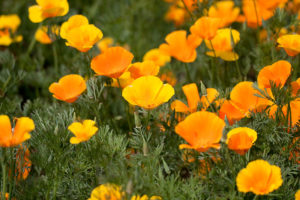 California Poppy (Eschscholzia californica) therapeutic uses include insomnia, migraine, stressful conditions, anxiety, neuralgia, and depression. The pharmacologic action is related to enzymatic degradation of catecholamines and adrenaline synthesis. It may synergize with Valerian Root. The dosing was a 70% alcohol extract ranging from 25mg-400mg/kg body weight as reported by the European Medicines Agency. [5] The mild sedative and anti-nociceptive properties may be due to the bonding of morphine and or other alkaloids at the gamma opioid receptors. Dosing was 1g unless combined with other medicinal herbs containing other sleep-promoting alkaloids. [6]

Valerian (Valeriana officinalis) may be a more attractive option over other sleeping due to the lack of a hangover effect. The mode of action may be to the inhibition of GABA. Few adverse events have been reported. The recommended dosage was 75mg-3000mg per day in extract form. [7]

Ashwagandha (Withania somnifera) has been reported to have anti-inflammatory, anti-stress antioxidant, immunomodulatory, anti-tumor, hemopoietic and rejuvenating properties. It also seems to have a positive influence on the endocrine, cardiopulmonary and CNS systems with little or no toxicity. [8]

Ashwagandha is used for the treatment of anxiety disorder often accompanied by the body’s physiologic stress response. It is an Ayurvedic herb that is categorized as an anti-oxidant, anti-inflammatory herbal supplement. Rats treated with a W. somnifera extract responded better to induced chronic stress symptoms. Human trials were conducted with 600mg-1000mg doses. Several randomized studies had varied outcomes. The general finding was W. somnifera produced favorable results. [9]

Rhodiola (Rhodiola rosea) has more than 140 compounds that have been isolated from the roots. These include monoterpene alcohols, glycosides,  flavonoids, and proanthocyanidins. Salidroside is of particular importance. Positive actions include anti-stress, anti-aging, anti-cancer, immunostimulating, anti-inflammatory and DNA repair. [10] 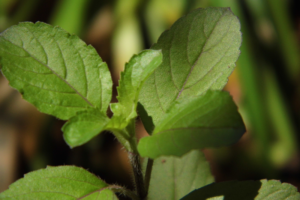 Holy Basil (Tulsi) (Ocimum tenuiflorum, O. sanctum) is usually prepared from the leaf as dried, fresh or an aqueous extract. The leaves contain several bioactive compounds including eugenol, beta-caryophyllene, linalool, and other secondary plant metabolites that could alone or synergistically produce therapeutic benefits. Reviewed studies suggest that Tulsi may be an effective adaptogen that has a role in helping address the psychological, physiological, immunological and metabolic stresses of modern living. Doses can be high without adverse effects. Doses as high as 10g have been reported. [12]

Tulsi is considered a potent adaptogen and has a unique combination of pharmacological actions that promote well being and resilience. Actions include antimicrobial, antioxidant, anti-inflammatory, chemoprotective, radioprotective, hepatoprotective, cardioprotective, neuroprotective and others. It enhances the Cytochrome p450 enzyme pathway. [13]

Cordyceps (Cordyceps spp.) is an important medicinal fungi with secondary plant metabolites that have pharmacological actions such as anti-inflammatory, antioxidant, anti-tumor, apoptosis and immunomodulatory. [15]

Cordyceps is a source of biometabolites with more than 21 clinically proven benefits on human health including anti-diabetic, anti-cancer, anti-tumor, anti-oxidative, immunomodulatory, sexual potentiator and anti-aging effects. [16] 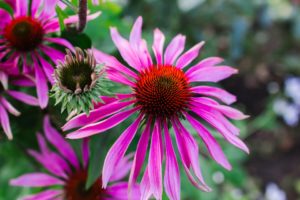 Echinacea (E. purpurea) contains alkamides that are structurally similar to anandamide. They are CB2 agonists and can be called ligands. It is suggested the mode of action is immunomodulation. [17] Echinacea’s immunostimulant activity is caused by the activation of polymorphonuclear and natural killer cells. It also enhances respiratory activity thus increasing leukocyte activity. In addition to the anti-viral/bacterial action, it is also an antioxidant. [18]

St. John’s Wort (Hypericum perforatum) in a randomized study of efficacy over placebo for mild depression was as effective as standard antidepressants. There are concerns about interactions with CYP 450 enzymes and the effect on medications such as warfarin, cyclosporins and selective SSRIs. [19]

St. John’s Wort contains a wide range of phytochemicals. Its mode of action is a potent reuptake inhibitor of serotonin, dopamine, noradrenaline, GABA and L-Glutamine. It is effective for mild to moderate depression, but not severe. Other benefits include: antibacterial, antioxidant, neuroprotective, wound healing, and reducing opioid dependence. The most common adverse effects include allergic reactions, dizziness, confusion, lethargy, and dry mouth. Meta-analysis showed an adverse effect drop out was less than 2.5%. It is phototoxic with high doses and induces CYP 450 enzyme activity. [20]

The following have been suggested for combining with cannabis, starting with 75% cannabis and 25% herbal supplement (adjust dosing as needed): Ashwagandha, Damiana, Kratom, Lavender, Echinacea, St. john’s Wort, Chamomile, Rosemary, Holy Basil, and Black Cohosh. [21,22] I could find no peer-reviewed literature to support this.

At the beginning of this review, I grouped the herbs to be discussed into the categories based on the main effect associated with their use: sedative, adaptogenic, immunomodulatory and anti-depressant. It is interesting to note that many share other antioxidant, anti-inflammatory, and antibacterial actions. Hops extract shows not only antibacterial activity against P. acnes and S. aureus, but also antioxidant and anti-inflammatory effects. [23]

The potential health benefit of herbs has been well documented not only through published literature but also through western herbal traditions and eastern medical systems such as Ayurveda and Traditional Chinese Medicine. The wisdom of these traditions has served as a basis for the research that has been done to date. When one considers the potential variables: confounding factors, the complexity of the phytochemicals working singularly or synergistically as well as the benefit of the placebo effect or the unbeneficial nocebo effect, prioritizing peer-reviewed studies over the reports of practicing clinicians and their patients may slow our progress in providing help to those in need. Certainly, the research that enlightens the medical community by identifying phytochemicals and understanding their pharmacodynamics and pharmacokinetics will be an important step forward. Additional studies on combining cannabis other medicinal herbs to achieve a better therapeutic effect, although difficult to fund and administer, will be helpful.

Herbalists usually categorize patients according to their energetic state. This could be an imbalance of one or a combination of imbalances:

Herbs can be categorized by their taste and energetic effect (warming/cooling, moistening/drying, constricting/relaxing). Balancing herbs tend to bring tissues back from stagnation or atrophy. Nourishing herbs provide nutrients to help heal and restore normal function. Cannabis is considered cooling and drying.

◆ Pungent herbs are stimulating and tend to be warming and drying. Examples are capsicum, Ginger, Black Pepper, and Thyme.

◆ Aromatic herbs also tend to be warming and drying to a lesser extent. Many are used as essential oils for their terpene content, such as: Peppermint, Chamomile, Basil and Lemon Balm

◆ Bitter herbs are usually cooling and drying. Some contain alkaloids (Goldenseal, Lobelia and California Poppy) and others non-alkaloids (Alfalfa, Kale and Hops)

◆ Astringent herbs are drying and constricting, such as White Oak, Yarrow and Plantain.

◆ Salty herbs are cooling and balancing. They have a high content of mineral salts. Some examples are Dandelion, Spinach, and Celery.

◆ Sweet herbs are balancing and moistening: Licorice, Astragalus and Ginseng.

Once the patient and plant energetic are matched, herbs that affect specific organ systems can be chosen to achieve the desired effect. [24,25]

There is adequate information to support the effectiveness of herbal medicine. Safety is another concern. The dangers of using herbal preparations for treatments include the following:

◆ Interaction of chemicals in herbal preparations with each other and with concomitantly taken drugs at the level of functionally important biological entities such as plasma proteins, receptors, ion chemical channel transporters, and others.

◆ Incompatibilities with patient age, sex genetic background, and organs responsible for eliminating the effects of chemicals in herbal preparations such as liver or kidney

◆ Inclusion of regular drugs with herbal preparations without disclosure [26]

There are many herbal stimulants that may have adverse effects for cardiac patients. Herbs that are contaminated with pesticides, heavy metals, bacteria or pharmaceutical agents are cause for concern. Herbal formulations with many herbal contents can have unpredictable effects. [27]

There is also concern about herbal interactions with general anesthetics. The main concern is herbs that have a sedative effect. It would be wise to discuss herbal supplements with the practitioners involved prior to general anesthesia. [28]

◆ Make a thorough client evaluation and base herbal recommendations on the findings for that individual.

◆ Make herbal preparations from wild herbs that are locally grown, if possible.

◆ Recommend herbal preparations that are manufactured by reputable companies that use Good Manufacturing Practices that have been established by the FDA and have their products tested for the quality of the content.

Herbalists should recommend herbs only after considering the pharmacodynamics, pharmacokinetics, and energetics to provide maximum safety and effectiveness.

“We are in the midst of a global pandemic of obesity, diabetes, cancer, dementia, depression and other chronic diseases caused by modern lifestyles and their associated lack of physical activity, high intake of sugar, fat, salt, alcohol, tobacco and exposure to a toxic cocktail of industrial chemicals. The solutions for this current health crisis are therefore more likely to be found in the homes and behaviors of individuals than in medical clinics, hospitals or pharmacies.” ~Marc M. Cohen [29]

This may be the key to medical practice achieving effective and lasting results with cannabis and other herbal therapies.

This article originally appeared on his blog and was reposted with permission.

The Science of Cannabis Scroll to top