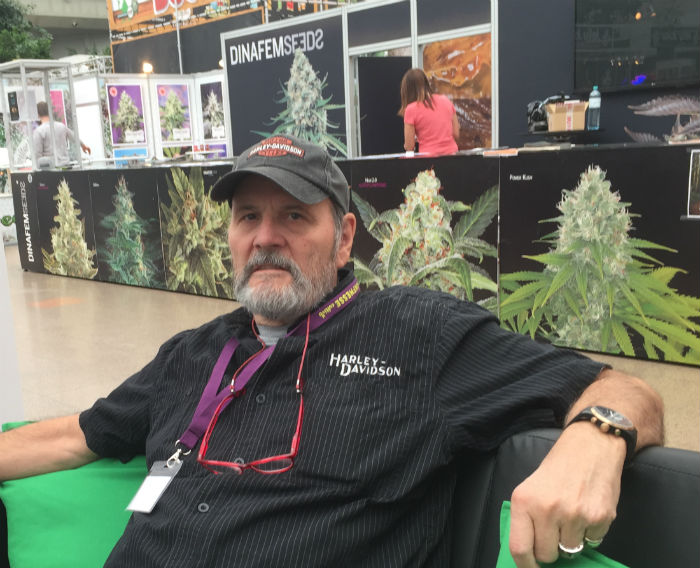 The supposedly-retired Rudolf Brenneisen is on the masthead as editor-in-chief of ‘Medical Cannabis and Cannabinoids,’ a forthcoming periodical described by its publisher, Karger, as:

“a peer-reviewed journal offering an international forum to present and discuss recent advances in the rapidly developing and challenging field of the medical use of cannabis and cannabinoids. It seeks to bridge the gap between empirical and evidence-based clinical medicine by covering current basic and applied as well as translational research topics. In addition to original papers, reviews and mini-reviews this journal features short communications, case-reports, technical notes, letters, and conference proceedings.”

The curriculum of Rudolf Brenneisen (Bern, 1949) comes down to nearly 40 years of acquiring and sharing knowledge of the medicinal potential of cannabis. It began and ended at the University of Bern, where he started as a researcher at the Institute of Pharmacy in 1975 and where he retired as Professor of Phytochemistry and Pharmacognosy of the Department of Research in 2014. Not surprising, because Mr Brenneisen’s country of birth has a rich tradition in the area of phytotherapy and cannabis was one of the plants that was offered as being beneficial way back in the last century. “My first research was focused on the pharmaceutical potential of blueberries”, remembers Mr. Brenneisen. “At some point in my Pharmacy study I was allowed to compose a cannabis preparation for corns and that generated my interest in the cannabis plant. I wondered whether the qualities of this ‘folk medicine’ could be translated to pharmacy. At the same time, I was extremely aware of the controversy surrounding cannabis and the risks of excess consumption. It became clear to me that you have to maintain a strict separation between medicinal and recreational use of cannabis – and the discussion about it.”

From forensic to medical

In the 1970s, Mr. Brenneisen took his first steps as a cannabis scientist, but in the forensic sphere. On the instructions of the Swiss Drogenpolizei he was at the cradle of a reliable method for determining the THC content of cannabis, and then moved to the Research Institute of Pharmaceutical Sciences in Oxford Mississippi, where together with Professor Mahmoud ElSohly he worked on the chemical fingerprint (terpenoids profiling) of the cannabis plant and its active components (cannabinoids). This knowledge brought Mr. Brenneisen to the laboratory of the Drug Enforcement Administration (DEA) in McLean, Virginia around the middle of the 1980s. A beautifully framed certificate on the wall in Mr. Brenneisen’s office in Bern serves as a daily reminder of that period. In the end, a pilot study with muscle-spasm patients brought the Swiss cannabis specialist back to his country of birth.

“That was a definite move from forensic to medical science”, said Mr. Brenneisen. “That study, where initially two patients were treated with THC, proved to be a milestone in cannabis research. The study was scaled up to several patients and actually opened the door to clinical studies of cannabis in Switzerland. Perhaps even in the rest of the world, because after that many trials were started up in the area of neurological disorders, such as Amyotrophic Lateral Sclerosis (ALS) and pain.”

… he had an unchanging mission; making sure that cannabis returned to the pharmacies, where it deserves a place alongside all other prescription medication. Therefore Mr. Brenneisen prefers to talk about the ‘re-medicalisation’ of cannabis. “It cannot be right that patients who benefit from cannabis have to go to the street or the internet to buy their ‘medication’ from the illegal circuit. For patients, who suffer enough as it is, it constitutes a possible criminal offence as well as a health risk. Practice has demonstrated time and again that you simply do not know what you are using. In my view, quality and safety are paramount and therefore a scientific, pharmaceutical approach is essential. I’m not a ‘cannabis pope’. I do not belong to the group of people who believe that everything from nature is good for your health by definition. And I’m not a Catholic either (laughs). However, I do believe in medicinal cannabis and by now there is scientific information to support that belief.”

There continues to be a massive call for scientific evidence. Not just for patients and doctors, but for health insurance companies, regulatory bodies and politicians – they are all waiting. Mr Brenneisen commented “It starts with patients. Over the years, plenty of anecdotal evidence has been gathered and although that is promising, ultimately the doctor or specialist need to understand it and believe in it, because they are closest to the patient. Therefore we need hard, clinical facts and everybody knows that is not easy because it costs time and money. Back to me; whether I will live to see the actual re-medicalisation of cannabis remains to be seen, but steps are being taken across the globe.”

“I simply still find it absolutely incredible to see how versatile a cannabis plant is and how many scientific questions medicinal cannabis produces, although I do struggle with the wholesale mystification that is taking place. That has been the case for CBD for quite some time. It is marketed aggressively as a food supplement or lifestyle product, and consumers go for it en masse. That is simply the result of a lack of knowledge. Cannabis – and I’m talking about the entire plant here – is a natural product with medicinal potential, it is not a panacea. We also know it carries risks. We need to get rid of stigmatization, but also of glorification. At the same time there are so many questions to answer, and that demands a scientific approach. What is the ideal formula of cannabis as medication and what does the endocannabinoid system do? Should we be looking for medication with an isolated active substance or is it actually the combination of cannabinoids that is making the difference? What is the ideal administration method? There is plenty of research of all those questions and I still find it fascinating and useful to bring all that knowledge together and to share it with the world.”

The heterogeneity and complexity of Cannabis extracts as antitumor agents.
Scroll to top