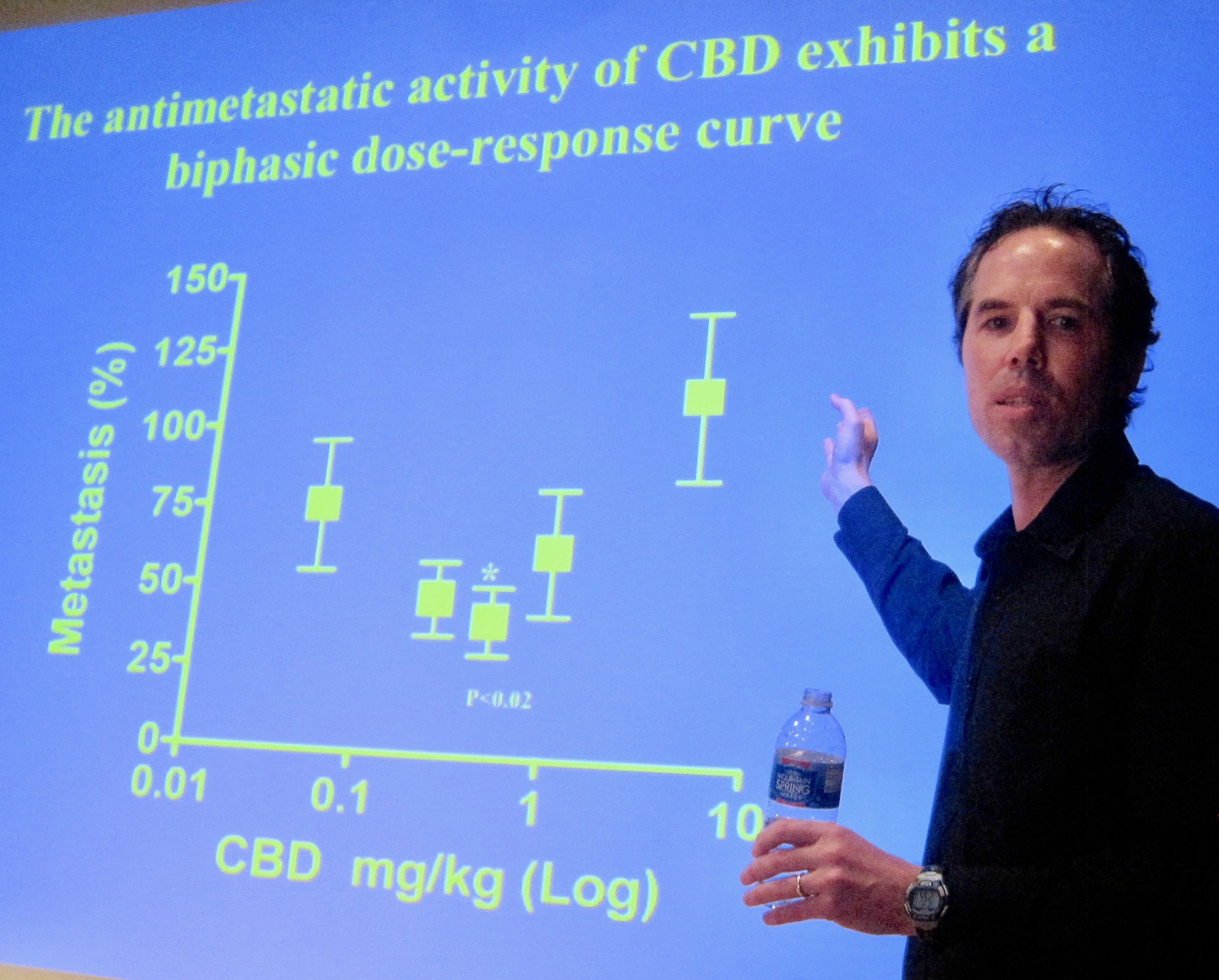 SCC Meeting 12/11/10 Barriers between pro-Cannabis MDs and the medical establishment are falling. Doctors who monitor cannabis use by patients were bursting with questions yesterday during a talk by Sean McAllister, PhD, who has been studying the anti-cancer effects of cannabinoids in the laboratory (on a grant from NIH and with a license from the DEA). The occasion was the winter meeting of the Society of Cannabis Clinicians. “That’s a very good question,” McAllister would say…and provide the answer, and tie it back into his main thread.

Dr. McAllister and colleagues at the California Pacific Medical Center Research Institute have discovered that CBD (Cannabidiol) is a very potent inhibitor of breast cancer. They have reported findings on the cumulative effect of CBD and THC in blocking proliferation of brain-cancer cells, and on CBD’s mechanism of action in blocking breast-cancer metastasis.

A new study by McAllister et al in the Journal of Breast Cancer Research and Treatment is an in-depth look at how CBD kills breast cancer cells in an animal model. CBD affects a protein called ID-1, which appears to be a major conductor of cancer cells. ID-1 is thus is an excellent target for a cancer treatment.

When cancer spreads it can eat through tissue (the process is called “metastasis”). CBD appears to inhibit the cells’ aggressive behavior. The image above is from an experiment by McAllister testing how CBD can stop the invasion of cancer cells. The cancer cells are placed on a gel which contain small holes. The cells are dosed with a drug and after a few days you can count the number of cells that have made it through. This simulates what a tumor does as it eats its way through human tissues. The little black triangles are the cells. You can see that only a half-dozen or so made it through the gel when dosed with CBD (on the right). The control on the left shows that in the absence of CBD, the cancer cells easily chew through the gel.

McAllister and colleagues at California Pacific have posted a video showing cannabinoids selectively killing cancer cells. The therapeutic potential of CBD or a synthetic version thereof is, of course, of interest to pharmaceutical companies. McAllister mentioned that work may soon start on a CBD and breast cancer clinical trial with synthetic cannabidiol provided by a British company, STI pharmaceuticals.

CBD May Counter The Munchies

The title of a paper published in Neuropsychopharmacology earlier this year —”Cannabidiol Attenuates the Appetitive Effects of Delta(9)-Tetrahydrocannabinol in Humans Smoking Their Chosen Cannabis“— suggests to us that CBD-rich Cannabis might work as an appetite suppressant. The authors, Celia Morgan and colleagues from University College London, tested 94 subjects on two occasions. The subjects smoked their own Cannabis and “while acutely under the influence” were offered more Cannabis, other drugs, and food. Morgan et al measured the eagerness with which the subjects responded to the offerings, and found that it correlated inversely with the CBD-to-THC ratio of the Cannabis the subjects were smoking. In other words, the higher the proportion of CBD they had ingested, the less desirous they became of more drugs and food.

In the great Prohibitionist tradition, Morgan et al concluded that “CBD has potential as a treatment for Cannabis dependence” and “possibly… for other addictive disorders.”

Here’s the abstract: “Worldwide Cannabis dependence is increasing, as is the concentration of Δ9-tetrahydrocannabinol (THC) in street Cannabis. At the same time, the concentration of the second most abundant cannabinoid in street Cannabis, cannabidiol (CBD), is decreasing. These two cannabinoids have opposing effects both pharmacologically and behaviorally when administered in the laboratory. No research has yet examined how the ratio of these constituents impacts on the appetitive/reinforcing effects of Cannabis in humans. A total of 94 Cannabis users were tested 7 days apart, once while non-intoxicated and once while acutely under the influence of their own chosen smoked Cannabis on dependence-related measures. Using an unprecedented methodology, a sample of Cannabis (as well as saliva) was collected from each user and analyzed for levels of cannabinoids. On the basis of CBD : THC ratios in the Cannabis, individuals from the top and bottom tertiles were directly compared on indices of the reinforcing effects of drugs, explicit liking, and implicit attentional bias to drug stimuli. When intoxicated, smokers of high CBD : THC strains showed reduced attentional bias to drug and food stimuli compared with smokers of low CBD : THC. Those smoking higher CBD : THC strains also showed lower self-rated liking of Cannabis stimuli on both test days. Our findings suggest that CBD has potential as a treatment for Cannabis dependence. The acute modulation of the incentive salience of drug cues by CBD may possibly generalize to a treatment for other addictive disorders.”

We’ll look into the appetite-suppressant angle here at Project CBD…In animal studies another compound in the Cannabis plant, THC-V, has been found to suppress food cravings.

CBD “Alerting” Except In High Doses

Nancy Sajben, MD, has shared a note from a patient about a CBD-rich strain purchased at Harborside Health Center (after he couldn’t find any CBD-rich Cannabis in Southern California).

The patient wrote: “Incredible Romulan, with a little vaping in the oven to remove THC, proved excellent for my chronic insomnia when made into a tincture.”

Project CBD explains: “Just a few comments on the concept of increasing CBD over THC —I am afraid that this is not rational. Firstly, you can’t create CBD when it’s not there to begin with. There are a lot of crazy misconceptions floating around along the lines of raw Cannabis has more CBD; that heating turns THC into CBD; or that you can differentially favor one over the other. None of these are true. The amount of CBD in a given chemotype is genetically determined, period. Generally speaking, drug strains of Cannabis available in North America rarely have any significant amount of CBD.

“THC has a boiling point of 157 Celsius, with CBD listed as 160-180 Celsius. However, both begin to sublimate off at even lower temperatures, and commercially available vaporizers, even the Volcano, do not heat evenly enough to allow fractionation of one component over another. What your patient is doing is wasting some cannabinoids and terpenoids by preheating. To get all of them out requires more prolonged heating, or a higher temperature. When the latter is done, it favors higher molecular weight sesquiterpenoids, many of which are sedating. That would account for the hypnotic effect along with whatever residual THC is left. Contrary to popular belief, CBD is actually alerting, except at exceptionally high doses.

References:   “A Tale of Two Cannabinoids: The Therapeutic Rationale for Combining Tetrahydrocannabinol and Cannabidiol” by Ethan Russo and Geoffrey W. Guy, and
“Effect of D-9-Tetrahydrocannabinol and Cannabidiol on Nocturnal Sleep and Early-Morning Behavior in Young Adults” by Anthony N. Nicholson, Claire Turner, Barbara M. Stone and Philip J. RobsonTop.

An Exchange re: Dosing Question

From a reader: Conventional meds have not prevented our son from having seizures. He has been given a remarkable Cannabis concentrate —17% THC, 16% CBD— and wants to make cookies. His plan —which his neurologist is aware of— is to take a single-dose cookie when he wakes up and every four hours thereafter until he goes to bed, to maintain roughly even cannabinoid levels. He wants to find the dose at which he can be functional and seizure-free. He will titrate, of course, but what should the starting point be —how many miligrams of THC and CBD should that cookie contain?

Reply from Janet Weiss, MD: Two options: If using the dronabinol dosing model as a starting point (30-90 mg), then an ingested dose would be 15 mg per cookie, consuming 6 cookies per day. Assumes that 50% of the cannabinoid content is destroyed in cooking or otherwise is not bioavailable, I would start with a recipe that results in 30 mg of cannabinoids per cookie in the batter.

If using the Sativex dosing model (2.7 mg THC/2.5 mg CBD) per spray, 5-12 sprays/day (which assumes no destruction from cooking and 80% mucosal bioavailability), then 13.9 mg. is a dose. Since GI bioavailability is less than mucosal, I again come up with an ingested dose of 15 mg per cookie. (And suggest starting with 30 mg. cannabinoids per cookie in the batter). That’s my 2 cents.

Questions were put to a source familiar with both HortaPharm’s and GW Pharmaceuticals’ research into CBD-rich cannabis. He generalized:

“At low doses, equal amounts of CBD will blunt the peak effect of THC somewhat, but not eliminate it by any means. If given first, CBD can block the high of THC. At higher doses, the effects of THC overwhelm those of CBD, and one can still become extremely high.”

There were two very interesting presentations at the 2010 ICRS conference in Lund, Sweden, relevant to dosing questions.

So dosage is everything, to paraphrase Paracelsus.

How Does CBD Counter Anxiety

A new study by Jose A. S. Crippa and a team of Brazilian investigators confirms that symptoms of Social Anxiety Disorder can be reduced by treatment with CBD —and identifies areas of the brain involved in the process. The paper by Crippa et al, “Neural basis of anxiolytic effects of cannabidiol in generalized social anxiety disorder: a preliminary report,” was published online Sept. 9 in the Journal of Psychopharmacology.

Ten men with severe Social Anxiety Disorder (SAD), ages 20 to 33, participated in the study, which was conducted at the University of Sao Paulo. Crystalline CBD from THC Pharm in Frankfurt was used. Prior to undergoing a neuroimaging procedure to measure blood flow in the brain, the subjects were given either 400 mg of CBD dissolved in corn oil and packed in a gel cap, or a placebo gel cap. A week later they were given the alternative treatment.

The investigators assumed that the neuroimaging —Single Photon Emission Computed Tomography (SPECT), which involves insertion of an intravenous tube and observation by a technician deploying a high-tech apparatus— was in itself an anxiety-producing event. Subjects recorded their anxiety levels before, during, and after the neuroimaging by means of a “Visual Analogue Mood Scale (VAMS).” The researchers were able to correlate these subjective reports with blood-flow activity measured in the brain. “CBD was associated with significantly decreased anxiety,” they concluded. They observed reduced radioactive tracer intake in the left parahippocampal gyrus, the hippocampus, and the inferior temporal gyrus. They saw increased uptake in the right posterior cingulated gyrus. “These results suggest that CBD reduces anxiety in SAD and that this is related to its effects on activity in limbic and paralimbic brain areas,” according to Crippa.

If CBD-rich Cannabis exerts similar effects, Crippa’s findings suggest that it can be useful in decreasing anxiety.